This Vegan Breakfast Hash is packed with flavor and loaded with veggie nutrition! Made with easy to find ingredients, it’s a perfect way to start your day!

This potato hash is a filling and delicious breakfast recipe that is definitely going to be a regular weekend dish in my house. You can make it in less than an hour, and it’s totally customizable!

Got leftover veggies in your fridge? Throw them in!

A favorite vegan protein? Go for it!

Hash is a dish that consists of meat, potatoes, and fried onions, and can also include vegetables. It’s a great way to use up leftovers.

According to Wikipedia, canned corned beef hash was a popular during and after World War 2 in the United States, Britain, and France, as rationing limited the availability of meat.

How do you make vegan potato hash?

I made a whole food plant based hash by using my oil free vegan breakfast sausage, potatoes, and vegetables, and cooking everything without oil. If you don’t want to use vegan sausage, you can leave it out, or substitute with another plant based protein.

There are a few steps in this recipe, but it actually comes together fairly quickly.

I start by cutting the potatoes into approximately 3/4 inch cubes. Toss these with the spices and a bit of the vegetable broth to help the seasonings stick to the potatoes.

Because it’s difficult to get crispy oil-free potatoes on the stove top, I bake them on a baking sheet lined with parchment paper or a silicone mat.

While the potatoes are baking, prepare the other ingredients.

I like to fry the diced vegan sausage in a nonstick skillet for a few minutes, just until it starts to brown, and then remove it from the pan.

Dice and saute the vegetables in the same pan that you used to brown the sausage. You want to cook the onions and peppers until they are soft, and the onion begins to caramelize.

Once the onions, peppers, and garlic are cooked, add the baked potatoes, sausage, and kale to the pan, and cook until the kale just starts to wilt.

Are you new to oil free cooking? Check out my Oil Free Cooking Tips to learn more about oil free baking, roasting, sauteing, and more!

What are good toppings for vegan breakfast hash?

This dish is tasty enough on its own, but if you’d like to add a little more flavor, try adding one or more of these:

One of the great things about vegan hash is that there are so many different ingredients you can use, the possibilities are endless!

Should I peel my potatoes?

That’s totally up to you! When using Yukon Gold potatoes, I like to leave the skins on. Peeling the potatoes is also fine.

What do I serve with vegan breakfast hash?

With the potatoes, vegetables, and vegan protein, this dish can be eaten as a meal on it’s own. But it’s also great served with tofu scramble, pancakes, or biscuits. This would also be delicious served in a breakfast burrito!

How do you store potato hash?

This recipe can be stored in an air tight container in the refrigerator for up to 4 or 5 days. Although it tastes best the first day, it can be made ahead and reheated in the microwave or in a pan on the stove. This makes it a great meal prep recipe!

Looking for more delicious vegan breakfast recipes? How about:

If you make this recipe, please be sure to leave a rating and feedback below. It only takes a few seconds, but helps other visitors to my site. Thank you for taking the time to leave your comment!

And come join my Oil Free Vegan Recipes and Support Facebook group, where you can share your favorite oil free vegan recipes, and give and receive support on your plant based journey.

Pin to save for later

I love creating tasty, oil-free, vegan recipes that everyone will love (even non-vegans)! Here you'll find vegan versions of your favorite comfort foods, as well as some new tastes! Join me on a path to improving your health, helping the planet, and saving animals.

More posts by this author.

Hi there! I'm Teresa. Thanks for stopping by! I'm excited to share with you my recipes for tasty, oil-free, vegan food that everyone will love (even non-vegans)! Join me on a path to improving your health, helping the planet, and saving animals.

Find out more about me! 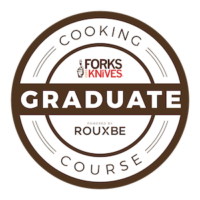